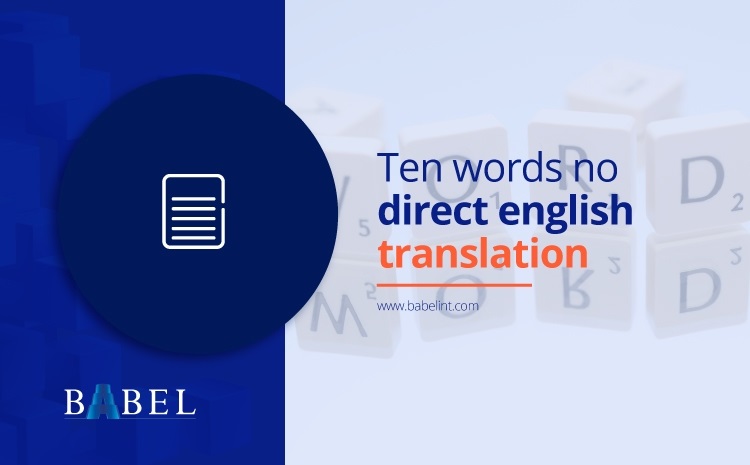 Portuguese writer José Saramago once said: “Writers produce national literature while translators produce universal literature.” While this may be true, there are words so deeply rooted in a culture or with such a specific meaning or origin that a precise or literal translation really is impossible.

So, in today’s Babel blog we offer you ten words or expressions that have no equivalent in English and often require explanation rather than translation:

This is the most romantic word on the list. Forelsket describes how you feel when you first fall in love. Although it is often translated as “being in love,” it is really more specific than that, referring to the euphoria of that first rush of love, the feeling that you are walking on air, seeing the world through rose-colored glasses. No word in English sums all that up.

Russian writer Vladmir Nabokov, who also wrote in English, insisted that “no single word in English renders all the shades of toska. At its deepest and most painful, it is a sensation of great spiritual anguish, often without any specific cause. At less morbid levels, it is a dull ache of the soul, a longing with nothing to long for, a sick pining, a vague restlessness, mental throes, yearning. In particular cases it may be the desire for somebody of something specific, nostalgia, love-sickness. At the lowest level it grades into ennui, boredom”

This extensive and detailed description makes it clear that these five letters open the door to a world of feeling, mostly of anguish and suffering. Nothing in English manages to convey so much in just one word.

You will often come across this Word in Mexican Spanish, although its origins are in Nahuatl. It is often said it refers to a feeling of sadness, but the essence of the word is really a call for attention. If someone tells you they are feeling “chipil” they want you to listen to them, pamper them, and give them a cuddle.

This is a rather long and specific word taken from the Yaghan language of Tierra del Fuego. It is listed in The Guinness Book of World Records as the most succinct word known and consequently extremely hard to translate. It refers to a look shared by two people who want to initiate something, but that neither will start, or perhaps a situation in which two people look at each other hoping the other will offer to do something which they both desire but are unwilling to do.

A romantic interpretation of the meaning also exists: “It is that look across the table when two people are sharing an unspoken but private moment. When each knows the other understands and is in agreement with what is being expressed.”

In essence it is a meaningful silence, although the nature of that meaning can be ambiguous and we don’t have a precise equivalent in our lexicon.

To better understand this expression, we recommend the Sergio Leone film The Good, The Bad and The Ugly with its mythical duel of eye contact between Clint Eastwood, Lee Van Cleef and Eli Wallach.

You could spend well over an hour debating the possible meaning and subsequent translation of this word and still not get very far. The most common translations are sympathy or regret, but you will also find mercy, repentance, remorse, grief, penitence, and contrition used. While all of these words may come close to capturing the sense of this word, or at least part of its meaning, none of them manage to communicate what Czech novelist Milan Kundera has offered as the sense this word communicates:

This word from Brazilian Portuguese describes something extremely specific: “The act of caressing or tenderly running fingers through a loved one’s hair.” In English there is no option but to describe the action itself as there is no equivalent word. What’s more, this act of affection can apply to lovers and pets equally.

Fika is usually translated as “a coffee and cake break”. While there is an element of truth in this translation, it is only partly correct since Fika is a concept, a state of mind, and an attitude. It is an activity intrinsic to Swedish culture that gives importance to spending time with friends and colleagues to share a cup of coffee (or tea) and a little something to eat.

And to close out this selection, let’s take three words from Spanish that make a translator’s task extremely difficult.

Breakfast, lunch and dinner are the three main meals of the day in English. Between meals you may have a snack, maybe a coffee or tea break, perhaps even afternoon tea at 4 o’clock in the afternoon with cucumber sandwiches, if we are to follow the stereotype.

In Spanish, however, there is a catch-all term. Merendar (verb) or Merienda (noun). This could mean an afternoon snack, a coffee break or a tea break. It is something light, usually in the afternoon or evening, although in certain Spanish-speaking countries it may also refer to what we call brunch.

No word in English covers all those possibilities.

This one can be tricky since its translation or explanation depends on context. It is usually used with reference to films or TV shows when the translation is release or premiere (yes, English uses a French word).

However, would it make sense to you if you were told someone premiered their new sneakers or their new house? Not really. But the word estrenar is also used this way, to refer to the moment when wear an item of clothing for the first time, or a piece of jewelry, or maybe when you go out for the first time with a new partner or move into a new house.

Estrenar works in all of these contexts and on all these levels, always referring to the first time something is done. No English word sums up all those possibilities so succinctly.

Here we have a word that is difficult to translate due to its deep roots in Spanish-speaking cultures. While attitudes and customs change and corporal punishment for children is now considered unacceptable, there was a time when children were subjected to spankings with belts, hairbrushes, sticks or belts.

Chanclazo refers to the preferred method of parents in Spain and Mexico, among other Spanish-speaking countries, and makes specific reference to use of the chancla –a generic term for flip-flops and sandals. Mothers would simply remove their footwear and launch it at the offending child.

Depending on the era when they grew up, this chancla may have even been a Dr. Scholl or a platform shoe. Either way, it was necessary to duck and most kids in Spain or Mexico will have a few anecdotes stored up about their mother’s aim and preferred footwear for the “chanclazo.”

In conclusion, languages are repositories of infinite meanings and cultural references, and this is precisely why professional translations demand highly specialized skills and knowledge to fully comprehend a given context.

Do you need a translation team that can provide just such a service? We can help you: