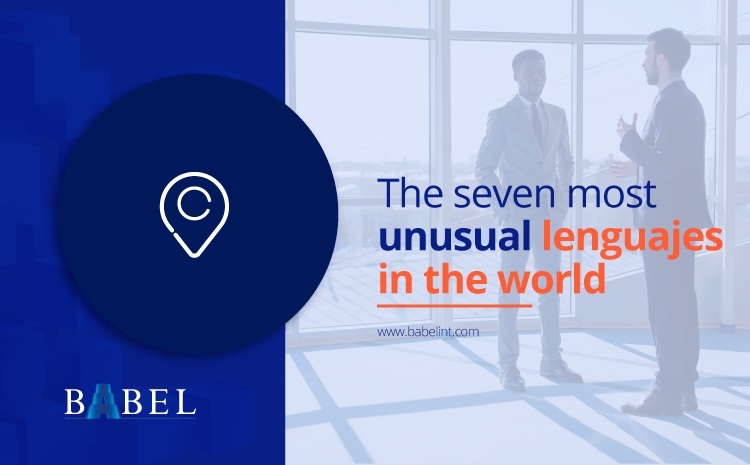 According to statistics from TOEFL (Test of English as a Foreign Language), English is the most translated and interpreted language in the world, followed by Mandarin Chinese. It is therefore common to find translation agencies specializing in these languages, but the world is big place and the number of languages it is home to can be overwhelming.

In this edition of the Babel International Translators blog, we bring you 7 of the most unusual languages in the world:

If you are a person of few words, you may want to master this language.

Anthropological research has found that the limitations of this language have deprived the tribe of historical consciousness (myths, anecdotes or theories of the past).

Piraha has a limited alphabet and most communication involves chanting, whistling and humming.

The language is so multicultural that an Afrikaans speaker and a Dutch speaker can understand each other perfectly.

The amazing thing about this South American language is that it does not use prepositions but postpositions, a type of “adposition” with the same function as the preposition whereby the postposition follows the word modified by the preposition. Truly a language that defies the rules of space and time.

Yupik is part of a special group of languages: agglutinative languages, or languages that use incredibly long words to represent complex phrases or ideas. Words in the Yupik language are essentially a summary of complete ideas.

But what is truly unusual about this language is that it was spoken exclusively by women and passed on exclusively from mother to daughter. Although Nushu has been spoken for hundreds of years, it was not until 1893 that we learned of its existence.

Why is that so odd? The strange thing is that in Evenki there are 30 words for reindeer. Without a doubt, a language for true specialists.

The cultural diversity of our planet is reflected in its multiple languages. If you require an agency with native translators in any language and specialized in the different sectors of the business world, we can help you: